The Importance Of Flossing Your Teeth 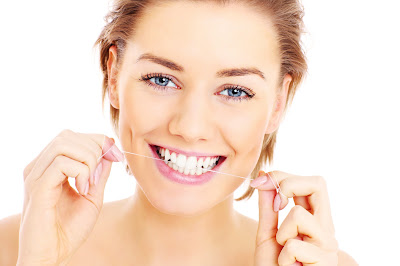 The old saying goes “Be true to your teeth or they’ll be false to you.” If you don’t take good care of your teeth, you could end up with severe mouth problems or even tooth loss. But brushing your teeth is just part of the dental care regimen. Your toothbrush can’t reach all of the nooks and crannies between your teeth, but dental floss can. Read on to learn the importance of flossing your teeth and how not flossing can affect your health.

Why Flossing Is So Important

Plaque is a film of bacteria and sugars that can coat the teeth. Everyone has plaque on their teeth, which is why brushing is important – it gets rid of the plaque. If you don’t brush often, plaque can build up and harden. Once it has hardened, it turns into calculus, also known as tartar. Plaque is responsible for many problems with the teeth and gums including:
Plaque doesn’t just affect your mouth, however. It can affect your overall health as well. The plaque that can build up in your arteries is, in fact, the same plaque that coats your teeth. The American Heart Association actually lists periodontal disease as a risk factor for cardiovascular disease. Here are some of the other health problems that plaque may cause:
[Related: The Link Between Gum Disease And Heart Problems]
Plaque and gum disease can also worsen existing health problems such as diabetes, lung diseases and heart disease. If all of this sounds a little worrisome, just remember that a little piece of floss can keep your health in check.

The Right Time To Floss

Because flossing is so important, it really doesn’t matter when you do it, so long as you do it. In the end, it comes down to a matter of preference because no time is really better than another. If you prefer to floss your teeth before you brush your teeth, then feel free to do so. Some experts say that flossing before you brush can be advantageous because it allows the toothpaste to seep in between your teeth and clean those areas that would otherwise be blocked with food particles.

Other experts recommend flossing after brushing because if you loosen food particles before you brush, there’s a chance that the toothbrush might shove them back into your teeth. Whenever you decide to floss, just make sure that you do so consistently, at least once a day.

How To Floss Your Teeth

If flossing has felt uncomfortable or hasn’t removed food particles like you wanted it to, you may have been flossing improperly. Here are the steps for a proper flossing:
The instrument with which you choose to floss is also a matter of preference. You can use the classic dental floss, or dental tape, which comes in waxed and unwaxed varieties as well as different flavors. You can also use interdental cleaners, which include plastic picks that have a small strand of dental floss built into them, or brushes, which have tiny bristles that clean in between your teeth.

It doesn’t matter what you use to floss or if you floss in the mornings, evenings, before brushing or after brushing. What’s important is that you incorporate flossing as a part of your dental care regimen and that you do it daily.
Sources: