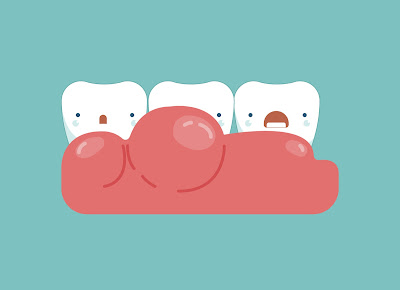 Gingivitis, an early gum infection, is a reversible disease characterized by tenderness, swelling, and most importantly, bleeding of the gum tissue. In the United States, a majority of youngsters over the age of thirteen already have gingivitis! The normal, healthy pink color darkens from the increase in blood volume, and goes through various shades of red. In more advanced cases, the gums may appear reddish-blue. Gingivitis usually begins gradually and progresses as symptoms become more prominent. It can, however, be a fluctuating disease. For example, inflamed areas develop and then become normal, only for inflammation to reappear at a later date. Bad breath, which frequently accompanies periodontal diseases, may first develop during gingivitis.

If plaque accumulation did no more than cause irritation or gingivitis, we might not be so concerned. Unfortunately, because most bleeding is ignored, the advantage is lost of detecting early signs of periodontal disease and receiving prompt and relatively simple care. If the disease progresses, serious consequences can develop.

As noted earlier, the gum reacts to plaque with swelling and inflammation. This condition permits the plaque to approach the normally well-adapted crevice or sulcus between the gingiva and tooth. The infection spreads into the attachment causing the gum to separate from the tooth.

With the gum seal broken, more plaque can bury itself within the newly enlarged gum space. The space created by this separation is called a periodontal pocket and represents the critical pathologic entity of periodontal disease. In general, it is the comparative measurement of these pockets that reveals the extent and seriousness of periodontal disease.

As the gum infection advances along the root, the pocket deepens with destruction of bone and attaching fibers. This condition is called periodontitis and the most common type is known as chronic periodontitis. The disease slowly progresses over time.

Pus can develop as supporting bone is destroyed and interacts with the infected gum tissue, usually in the latter stages of the disease. Sometimes so much support is destroyed that the teeth become loose. Periodontitis is serious business. Left untreated, periodontitis has the potential to continue for many years as a chronic, progressive infection, and a true threat to the survival of the teeth.

A very destructive type of periodontal disease, less common than chronic periodontitis, is known as aggressive periodontitis (AgP). Individuals with aggressive periodontitis demonstrate significant and rapid bone loss around their teeth. The disease is particularly disturbing as it is often diagnosed in children and young adults. It can first appear around the time of puberty or even earlier, although it is also diagnosed later in life. A peculiar characteristic often seen with AgP is that destruction of underlying bone can be extensive even though there is only a surprisingly small amount of plaque in the mouth.

AgP patients do not always respond well to routine periodontal therapy. Some systemic diseases or altered mechanisms of the body are thought to contribute to the unpredictability and difficulty in treating AgP. The influence of defective cells in the body's defense mechanism has been suggested as one explanation. Also, this type of periodontal disease is frequently found among family members, supporting the likelihood of a genetic predisposition to AgP.