What Really is a Tooth? 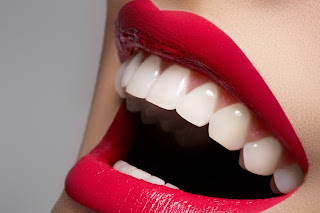 A tooth (plural teeth) is a hard, calcified structure found in the jaws (or mouths) of many vertebrates and used to break down food. Some animals, particularly carnivores and omnivores, also use teeth to help with capturing or wounding prey, tearing food, for defensive purposes, to intimidate other animals often including their own, or to carry prey or their young. The roots of teeth are covered by gums. Teeth are not made of bone, but rather of multiple tissues of varying density and hardness that originate from the embryonic germ layer, the ectoderm.

The general structure of teeth is similar across the vertebrates, although there is considerable variation in their form and position. The teeth of mammals have deep roots, and this pattern is also found in some fish, and in crocodilians. In most teleost fish, however, the teeth are attached to the outer surface of the bone, while in lizards they are attached to the inner surface of the jaw by one side. In cartilaginous fish, such as sharks, the teeth are attached by tough ligaments to the hoops of cartilage that form the jaw.

Some animals develop only one set of teeth (monophyodonts) while others are diphyodonts, i.e. they have an early set of deciduous teeth and a later set of permanent or "adult" teeth. Still others develop many sets (polyphyodonts). Sharks, for example, grow a new set of teeth every two weeks to replace worn teeth. Most extant mammals including humans are diphyodonts, but there are exceptions including elephants, kangaroos, and manatees, all of which are polyphyodonts.

Rodent incisors grow and wear away continually through gnawing, which helps maintain relatively constant length. The industry of the beaver is due in part to this qualification. Many rodents such as voles and guinea pigs, but not mice, as well as leporidae like rabbits, have continuously growing molars in addition to incisors. Also, tusks (in tusked mammals) grow almost throughout life.

Teeth are not always attached to the jaw, as they are in mammals. In many reptiles and fish, teeth are attached to the palate or to the floor of the mouth, forming additional rows inside those on the jaws proper. Some teleosts even have teeth in the pharynx. While not true teeth in the usual sense, the dermal denticles of sharks are almost identical in structure and are likely to have the same evolutionary origin. Indeed, teeth appear to have first evolved in sharks, and are not found in the more primitive jawless fish – while lampreys do have tooth-like structures on the tongue, these are in fact, composed of keratin, not of dentine or enamel, and bear no relationship to true teeth. Though "modern" teeth-like structures with dentine and enamel have been found in late conodonts, they are now supposed to have evolved independently of later vertebrates' teeth.

Living amphibians typically have small teeth, or none at all, since they commonly feed only on soft foods. In reptiles, teeth are generally simple and conical in shape, although there is some variation between species, most notably the venom-injecting fangs of snakes. The pattern of incisors, canines, premolars and molars is found only in mammals, and to varying extents, in their evolutionary ancestors. The numbers of these types of teeth vary greatly between species; zoologists use a standardised dental formula to describe the precise pattern in any given group.